I had the shocking realization this week that my son will be driving in four years. I advised him to start saving now for his car.  Now I'm wondering what the heck I've done in the last 11 years to really prepare him for being an adult.  I'm sure we've got the basics covered, mediocre hygiene, (he is a boy after all), average table manners, takes out the trash every Thursday night.  Yea, yea, but what about the rest.  The rest of his life.

I spend about 50 hours a week working in a career I enjoy and I'm good at.  Have I figured out how to help him do that?  Not to pick my same career, but to pick something he likes, that he's good at, and can make a living at?  I got a little panicked thinking about his "career clock" ticking. I've been so busy making sure he's got lunch money and the right Lego set for Christmas, I forgot to shift gears into life preparation stage.

Like all of my freak out attacks, I think I can catch up in one evening of meaningful life changing conversation. Friday afternoon I pick him up early from school for an eye doctor appointment.  We have some one on one time.  (Note to self: schedule way more of this. Not the eye doctor, that's expensive, the one on one part. )

He tells me he's writing another book. This kid is 11. This is his second book. I'm 43 and have been dreaming about writing a book for years.  Maybe he should be doing the coaching. He reads me his first three chapters.  They are absoluting amazing.  Not just the, "my kid is the cutest, Mom crap". He is a fantastic writer.  He's also the kid in the back of the bus with a notebook and pencil writing frantically while everyone else is talking about girls and football practice.

Lesson 1: Run with your strengths.  Don't apologize that you don't have a sports trophy on your shelf like the other dudes. Don't spend one minute thinking about who you're not. Celebrate the gifts that God has given you and work them over like there's no tomorrow! Marcus Buckingham writes about this in Now Discover Your Strengths. I wish I would have thought about this or had someone talk to me about this when I was younger.  I might have spent less time running with the pack and been signing books at Barnes and Noble by now. The boy and I had a good conversation about the kinds of things he likes to write about and how they are so different from what I write about and how both are pretty cool.  I want him to tune in to what he likes and why he likes it and then stand loud and proud as the best writer in middle school and bus 59.

Lesson 2: Your strengths are not your actual job.  Huh?  I know, the title could use some tweaking.  Hang in there with me.  Let's stick with the boy and his example.  He wants to be a Lego architect.  Yep, people get paid to build those huge sculptures at Disney and in the mall at the LegoShop. It might as well be my kid if that's what he wants to do. 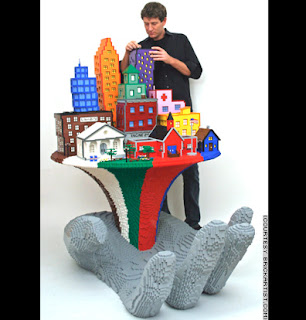 I asked him to think about what it is about building Legos that he loves. I suggested that if he ever got tired of working for Lego (yes, he rolled his eyes at me) that he would want to take his skills and do something else. Something besides moving back into our basement.  I encouraged him to take art and design classes.  Someone once told him that if he liked to build Legos that he might be an architect someday.  If you talk to my son, he has no desire to build houses or skyscrapers.  He only uses those Lego instructions once and then he builds his own designs that are way better than what came in the box. He's a designer.

I asked him to look around the room and tell me one thing that someone didn't design.  He was at least slightly amused. In my head I would have said he was amazed by my brilliance and perspective. I shared that even a company like Johnson and Johnson that makes soap might need a designer.  He thought that was crazy. I said, "why does soap have to be shaped in a boring block?" Why couldn't he design a soap that fit the inside of your hand so when you picked it up, it didn't slip out and land on your toe in the shower? We went on to think about how much more you could charge for cool soap that would really get someone's attention in the store. Now my boy is thinking about design skills, not just working for Lego. At least I like to think he is. (Note to self: that one conversation had more impact on me than him, remind him 423 more times.)

What skills do you use in your current job that are just a piece of your job title?  Hello SAHM's (Stay at Home Mom's) once junior is off to college, if you want to think about a career, what are the skills that you enjoyed most about being a SAHM? Organization, negotiation, relationship building, you've got more skills than most in corporate america.  Name them, claim them and you could get paid to use them, after you raise the next Nobel Peace Prize winner and have some time on your hands.

I have friends that are stuck in jobs they are not all that excited about or just plain can't stand.  It's always an interesting conversation when they realize they don't have to stay in the same industry or in the same occupation, take the skills that you are good at AND enjoy.  Market those, use those, that's when work gets interesting. I've also found, I make a ton more money doing the stuff I'm good at and I enjoy.

Those are the first two lessons I've shared with the boy in my Life Prep101 class.  I'm not sure he even knows he's signed up for this class.  I'll keep you posted if he shows up ready for the quiz next week.
Posted by test at 9:31 PM