Root Canal Series: What is acting as infected pulp in your life?

Last week I went in for part 2 of my root canal.  Yes, who knew that some root canals come in a three part series?

If you've not had one, it's kind of a big deal.  A "sucky" big deal. And of course as a blogger, it has me thinking about stuff.

Here's just one thing I learned from my root canal.

>>> I'm seriously thinking of a three part blog series to go with my three part root canal, because that's the way I roll.  And because I've been so ridiculously busy at work, my inspiration bucket either has a hole in it or is just plain drying up. So, take what you can get RandomThinkers!<<<<


Ok back to one thing I learned from root canal. 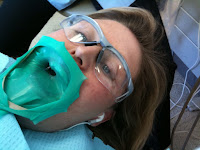 Sometimes you have to remove the infected pulp from a situation to get any relief at all.

Infected pulp you say?  Yes, infected pulp.  Which is what had me ready to commit hari-kari. Which is completely different from Harry Caray. I'll leave that to you for a little side research.

So I went to the grim reaper also called my endodontist . This is a dentist who decided mere fillings weren't enough and had to go on to removing infected pulp for a living.

I'm sure together we could build a pretty impressive list of infected pulp producers.  Is there something in your life right now that has you wanting to commit hari-kari? 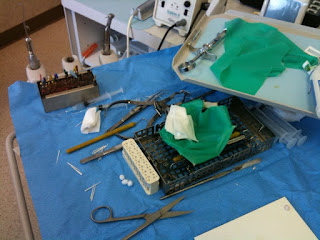 Could you take your own drill and file and suck out that infected pulp and get on with your life in a little less pain?
Posted by test at 11:04 AM