This would come in quite handy.

Picture this, someone says something to you that makes you feel "ick". Maybe mad "ick" or sad "ick", just "ick".  You're either slamming stuff or dragging your head feeling, well, "ick". Then you realize you need to take the kids to soccer. Instead of yelling at them and sharing your "ick", you put your "ick" in the box.  You can then go about your tasks without sharing your "ick". Cause you've got your "ick in the box".

You have an "ick" day at work. The worst. You drive home and just outside the door before you enter the house, you open your 'ick box' and you drop in the 'ick'. Smiling and perky you enter the house like one of the Cleavers, "Honey, I'm home." Then the family smiles back, "Great to see you, we've missed you." - OK, that's a little more than I can handle too, but you get the point.

Sometimes you'll need to go and clean out your 'ick' box, it's likely to get kinda stinky in there. But I imagine some of the 'ick' isn't that bad and when you go to look in the box, it disappeared.  It was only 'icky' when you were wearing it.

Some 'ick' is just "real ick'. That will likely take an 'ick remover" plan. Maybe you remove the person that keeps passing their 'ick', or you slather on some 'ick repellent' and hope they get better. 'Ick' has many sources. The 'ick box' would keep you from spreading it around, like a nasty bacterial infection. Wouldn't that be nice? 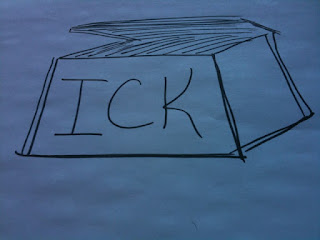