My Blog - Another Milestone, Another Day of Vulnerability

There's a strong possibility that my blog will hit 45,000 views this week.

I have no idea if that is good or bad from the prospective of blog professionals or social media experts.  I, however, find it baffling.

When my now 11 year old daughter was a toddler (you do the math, I'm a writer) I started collecting stories and poems that I had written over the years and decided to put them into a binder.  Yes, old school.  I printed some and some were hand written. I purchased a pretty binder from a company that made photo albums.  I decided to monogram my pretty binder. I sat at my desk and spent all of 30 seconds to name my binder. I would call it, Random Thoughts by Rebecca.   I ordered it. 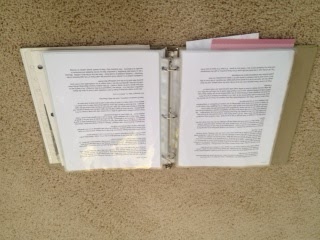 I loved reading through my stories, some I had forgotten that I had even written.

A few years later I overheard someone talking about a blog.  I began to hear this come up again and again, blog this blog that.  It was time for Random Thoughts by Rebecca to go virtual.  My husband was away on a business trip and the kids were both in bed and I was on my laptop basked by the glow of the tv.  I started googling about blogs and blogging and quickly set up mine using Blogger. I went and grabbed my pretty green binder and typed some of my stories into my new "binder" called my blog.

All I could think about was how weird it was that other people would now be able to see my blog and read my stories.  I felt .......well ....... vulnerable.  In an act of courage and naivete'  I hit publish.  Then I waited and wondered.  So what did that mean?  Published?  How would people see it or find it?  Maybe they would.  Maybe they wouldn't.

They didn't.  I hadn't found a way to really put it out there into people's homes and onto their devices.  It was just hanging out in cyber space looking all awkward.  It was, however, a start. To start still took courage and the willingness to be vulnerable.

A few years later while we were going through some tough times after my husband lost his job, I started to write a series on the blog called  Lessons from the Recession.  I found comfort for myself in writing.  In another act of courage I published that series on Facebook.  Talk about vulnerability, I shouted to the world, "Hey everyone, my husband lost his job and we're struggling!"  It took some getting used to for my husband.  I had put his vulnerability on display too.

I started getting comments back from people in similar situations saying that my blog had really helped them in tough times.  I was shocked.  People were reading.  They were responding.  I was helping them.  This fueled my writing like nothing ever had.  I had always wanted to be a writer but had feared really pursuing it.  Fear, the big blocker of so many people's dreams.

On a Saturday, I was in my office writing and reading other blogs and I stumbled on a series from the Wall Street Journal online edition called Laid Off and Looking.  It was a series of posts, mostly from guest bloggers, about their job search stories.  On a whim, I emailed the publisher with a link to my blog and a suggestion that I write a post from the spouses' perspective.  I hit send.  I wouldn't necessarily call this an act of courage because I had no belief that they would respond.  I kid you not, 10 minutes later I got a return email.  I FREAKED OUT!  They asked me to write the post, gave me the number of words they wanted and the deadline.  I went screaming down the stairs out to the garage where Blaine was working on something and said, "You're not going to believe this!"


I'll never forget his response, one mixed with praise and fear.  I'm sure in his head it went something like this, "what in the hell has she done now."  While I was coming out of my skin with excitement that I was going to be writing a post for the Wall Street Journal (I always left out the "online edition" part) he was thinking........now she's broadcasting the worst time in my life to the world!  Let's just say that vulnerability comes easier to some than others.  For several days he stewed and was a little more than frustrated with me at the same time he was really excited for me.  He just wished that my writing gigs weren't somehow coming at his expense.

I reached out to some fellow word nerd friends with my excitement.  One advised me to get a real website before I sent in my credentials to WSJ.  Basically his message was ....Don't be lame and post a Blogger site to the WSJ, you need a .com!  So in 24 hours I figured how to do that and migrated over to my current site, www.RandomThoughtsbyRebecca.com .  Home Sweet Home. Blog Sweet Blog.

It was then that my euphoria was slapped up side the head with reality and I encountered the world of online comments, opinions and feedback.  It was vulnerability at it's peek.  What I learned about online publishing is, for every nice comment there are 20 mean comments set out to crush you.  Some did.  I licked my wounds for a little while.  Opinionated mean spirited people love the faceless communication forum of online posting and commenting.  I also realized that my "glass half full" view of Lessons from the Recession was not at all shared by the masses.  Most people were pissed off and my guest post entry was not an event they gave a rats ass about other than giving them another outlet for their nastiness.

After a few days I dusted myself off from the pit of vulnerability that I had put myself into and took a hard look in the mirror.

You still believe in what you wrote.  Just because they don't see the world the same way, doesn't make you wrong or a bad writer.  In fact, there were a few people that emailed me personally and thanked me for the post. Not my mom and my uncles, real people, real reader kind of people.

Summary: Never Cater to the Haters.

And I continued to write.

What I know about how to boost blog traffic and page views will fit inside a peanut M&M so I know for the professional world of online writers 45,000 views is probably a joke.  I don't care.  This was a dream I didn't even know I should be dreaming.  A dream born on the couch of a really nice sectional from Kittles furniture store in Noblesville Indiana.   We're celebrating.  Never Cater to the Haters.

This boost in confidence allowed me to dream a little bigger. After years of contemplating and searching, I finally found a topic that could be a real book.    I've been working for just shy of two years on a book called, Not Wrong Just Different - A handbook for ADD relationships.  With a husband and a son both with Attention Deficit Disorder (ADD) and a career based on how to build stronger relationships, finally something I know a lot about!

Again, a topic at my husband's expense.  Hmmmm.  I should get my own life I guess and quit writing about his. ( I love you, honey. And remember we had Beef Stroganoff last night, your favorite.)

So the book outline went out to a handful of friends for feedback last week. Basically an embossed invite to vulnerability.  *sigh*  The manifesto I'm putting out first is about 90% done.  If you'd like to check out some of the posts on this topic you can go to www.NotWrongJustDifferent.com.  I also have a Facebook page with the same name.

It's time to put more vulnerability on the line.  A.B.C.   Always Be Courageous.

What stands out to me as I look at my blog journey and other successes in my life is that the smartest or the best doesn't always win, it's the one that has the courage to start.  Courage and the willingness to be vulnerable, that's the stuff that winning is made of.

Thank you for reading and following this blog.  It truly humbles me.  When you comment I fall to my knees in gratitude.

Here's to another year of courage and vulnerability.

Don't Cater to the Haters