I decided my new year would be to serve more, give more, get my priorities straight.

As always, when you set out your intentions the Good Lord brings you opportunity.

I received this letter today from a very dear friend of mine Todd Harrison.  I know Todd personally. We worked together professionally for many years and he is one of the good ones.

Please read this letter and request from Todd.  I need us to rally about Random Thinkers.  I wish I had the full amount to donate myself.  I donated what I could and now I'm using my network and you, my tribe, to help this family.

Thanks and Happy New Year to you all!

As we begin this New Year full of hope, I wanted to take a moment to share with you a story about a very special family – the Tawfeeq family –and how they came to be a part of my family’s life. After reading this story, you will understand why I have committed to ensuring they have the greatest opportunity for life, liberty and the pursuit of happiness.

Many of you are aware that in March 2003 my Army National Guard battalion deployed in support of Operation Iraqi Freedom. In those early days, we relied on local English-speaking Iraqis to serve as our translators. That is when I met Shihab Ahmed Tawfeeq.

Shihab served as my personal translator from June 2003 to July 2004. During this time I got know this man and his family extremely well. They treated like me like a member of their own family and brought me great comfort during the war. Shihab also used his language skills and knowledge of the local culture to help protect and save many lives, both my own and the soldiers in my battalion.

As I was preparing to leave Iraq in 2004, Shihab expressed his concerns about his family’s safety. He had received numerous threats of violence because of his work with and loyalty to the U.S. military. He told me of his long-held dream to emigrate to the U.S. and asked if that would be possible, especially since he had served me and my battalion so faithfully. I told him that his service to our country would not be forgotten and that I would do whatever I could to make sure his dream came true.

Shortly after I left, one of the local militia attempted to kidnap Shihab’s youngest daughter in retaliation for his working with the U.S. Army. After that failed attempt, his brother-in-law was killed outside Shihab’s home. The killers left a note indicating that all of Shihab’s family would be killed because of his work with the U.S. military. Fearing for his family’s safety, Shihab quickly sold their house and possessions and they fled Iraq with a few thousand dollars and whatever they could carry. Thus began their 5-year struggle to get to the U.S.

First, they went to Jordan, entering the country on guest visas, hoping to emigrate to the U.S. before their visas expired. It quickly became clear that the U.S. had no plans in place to help those Iraqis who had served us so well. The family’s guest visas from Jordan expired and they were once again forced to leave. They had no place to go – no country to call home, so they sold what few possessions they had left and bought airline tickets to Cairo, Egypt.

I will spare you the details about their difficult life in Egypt, but suffice it to say that the family suffered heavily during this 3-year period of time. Not only because they had no money, but also because Iraqi exiles were considered international pariahs. They could not work, go to school or have access to public services. The lack of medical care was of critical importance to the family as Shihab’s oldest daughter, Rand, had received a kidney transplant just prior to the war and was in desperate need of constant medical care.

I would like to take a moment here to say a heartfelt thank you to so many of you who donated money and other items to the family during this time. It was only through your generosity that they were able to survive their time in Egypt.

In 2006, the Tawfeeq Family’s hope was renewed again. After 3 long years of constant work with an immigration attorney, Senator Richard Lugar’s office, and many others, our government finally approved them for a special immigrant visa set aside especially for Iraqi interpreters and their families. In November 2009, the family (Shihab, his wife Khawla, his son Saad and his youngest daughter Shahad) arrived in Indianapolis, Indiana. Unfortunately, by this time the two older daughters (Rand and Ban) had already turned 21 and were ineligible to emigrate with the family under this special immigrant visa program. They were forced to stay in Egypt as refugees; however through the continued efforts of many people they were reunited with their family in July of 2010 as part of an Iraqi refugee relocation program.

Now, the family is settled in Greenwood, Indiana (just south of Indianapolis) and Shihab has a temporary job that provides a take home pay of around $300/week. He hopes the job will become permanent at some point in the near future. Thanks to the enormous efforts of my parents, Saad and Ban are enrolled in English classes at a local high school and both will begin GED classes in the Spring. They also helped Shahad enroll in college at Ivy Tech, where she hopes to someday obtain a nursing degree. Rand is finally getting the medical attention she requires for her kidney and is getting stronger every day. Khawla, like most mothers, is working diligently to make their humble apartment a “real American” home. She proudly displays a large U.S. flag on the wall in their living room.

This family, whom I consider part of my own, has been through so much during the past 6 years. They are resilient and proud of their ability to survive, but one more crisis is looming on the horizon. Upon obtaining their visas, the Church World Service provided them with a travel loan to purchase their airline tickets to the U.S. The loans are now due and the family must collectively repay more than $8,000.

We have all been blessed with so much. This family, who has so little and has endured so much, deserves an opportunity to rebuild and enjoy their new lives here without this additional financial burden. I am asking you for your support. If you or anyone you know would like to contribute to the repayment of this travel loan on behalf of the Tawfeeq family, I would be personally grateful for the generosity.

Below is a copy of the loan payment information so donations can go directly to Church World Service. I have also attached pictures of the Tawfeeq family so you can see who you are helping. If financial support is not possible, we ask for your continued thoughts and prayers for the health and success of this family.

Thank you all and God bless! 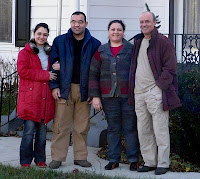