Play the Part You Are Given - and play it really well

Today is Dude's, my 15 year old son, last day of School of Rock practice before he plays his gig tonight.  He's a true artist.  Loves to get up on stage and jam, no fear, just joy.  The set this year is 90's so there aren't a lot of screaming guitar solos like last year's 80's set.

There is, however, one amazing minute long epic guitar solo.  And he isn't playing it.

I think because he's been playing longer than some of the kids and he is the oldest one there at a very manly and mature 15, he made some assumptions.  Like, "Surely I'll get the great parts".   And his favorite Smashing Pumpkins song was cut from the playlist. This happens sometimes.  You've got a week to put a group of kids together and play a set of 6-8 songs and sometimes you just have to let one or two go to focus on the rest. So the combination of these two realities had him a little bummed out.

His disappointment started to escalate into, "how dare they" this morning.  I saw his mood shift and he was no longer the joyful artist.  He mentioned going to the director and asking to have part of the solo.  I simply said, "let's talk about it in the car."  He bristled for the lecture.  I instead kept it light and said this.

Dude, do you know what good sportsmanship is?  Of course he did.  Well, this is your sport.  And ultimately, you are old enough to decide how you will handle this today but I'm just asking you to look at all sides.  I'm a huge fan of standing up for what you want and being brave, however, I'm also a huge fan of the lesser known traits of humility and gratitude.

I reminded him that the Lord wants us to give our very best with the part we are given, digging ditches or rocking a screaming guitar solo. Maybe this is a different lesson than bravery but he'd need to decide.  I am really blessed that my son is willing to listen and discuss things like this.  We had a bit of banter.  He's a pretty good negotiator, he tried the, "but you paid big money for this camp" approach.  He tried to suck me in and get me worked up that my money should  buy him a guitar solo.  No go, Dude, that's not my game.

After a few minutes he started to tell me about some of the other songs and how much fun they were to play.  His joy returned.  I smiled and said, "it's a lot more fun to focus on the good stuff isn't it?"  He gave me the eye roll and said, "I know I know, I'm sorry I got worked up about it."

And once he focused back on what he loved about the parts he does have, his joy returned.  Gratitude is amazing and transformational.  Find friends and family that focus you back on what you do have. So many people want to focus on what they don't have or when they were "wronged" or what sucks and well, that really sucks.  Those relationships are exhausting.  And you have complete control over your ability to practice gratitude.  Try it, you'll be surprised how the joy returns. 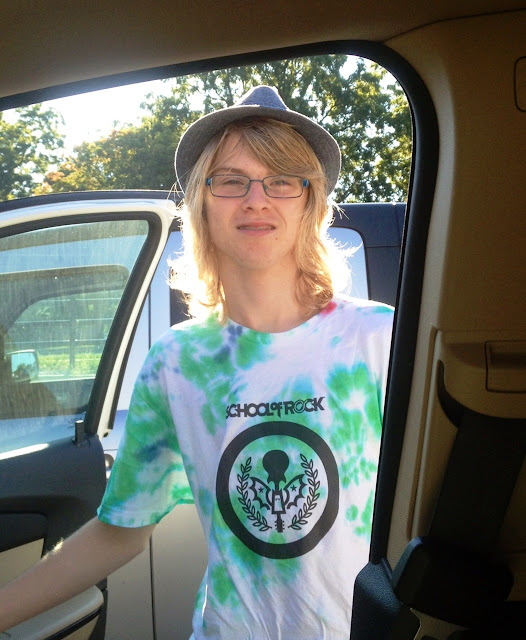